A toxin is defined as a poisonous substance produced within living cells or organisms. Something toxic to our health is considered anything that might cause death or debilitation through varying degrees of exposure. As a nurse, I run the risk of coming into contact with hazards every single shift: it comes with the territory. While I might throw on a mask or gown or pair of gloves in an attempt to prevent harm from creeping in, it is far easier to protect myself physically than it is emotionally. Salves and serums; blood and guts; biohazards and inhalants; solvents and sewage pale in comparison to the toxic people that enter our lives daily. How do we protect ourselves from the vicious cycle of negativity that permeates when we allow the wrong people to impact us? Is it possible to create a barrier that allows us to interact without getting burned?

This is one of those “easier said than done” life circumstances that often feels relatively harmless and snowballs into a painfully evident energy-suck. Try as you might to fight against it, negativity will wear you down. I am a firm believer in the premise that you get from the universe what you put into it, and that you should surround yourself with those who support this notion. I don’t even mean professionally as a nurse: I do my very best to practice this every day and in every circumstance. Now, before you roll your eyes and tell me to keep that existential “Secret” bullshit to myself, I want to clarify something: I consider myself to be a realist. Despite my inclination toward pursing my own dreams — and encouraging others to do the same — I understand that we cannot exist in a vacuum. Mottos and mantras and self-awareness by no means beget perfect circumstances. Instead, evil wins. Lives are taken too soon. Very bad things happen to the very best people. And yet despite this painfully complicated dichotomy, I work hard to flavor my realism with a healthy splash of optimism.

Enter the naysayers. The hate-mongers. The Negative Nancys. The Debbie Downers. The toxic people in our lives. Be they knit closely in the form of family or loosely threaded strangers, toxic energy spreads from its own core outward. Some toxic people strike harder and faster than others, but in the end, repeated exposure in incremental doses is lethal all the same. What are we to do — any and all of us — when the beams of negative energy strike our own, be it a slow burn or a fiery blaze? Do we fight fire with fire, or simply choke on the smoke?

Toxic people: they’re everywhere. They touch everything and leave a rancid residue. Toxic energy tries to tarnish my realistic optimism with a healthy dose of negativity and render it useless. Wasted. Undrinkable. Unthinkable.

And so I do the unimaginable: I embrace the negativity. I provide the peanut gallery with a sounding board. I try to understand the naysayers and the commentators who exclusively thrive through the hindsight promised of Monday Morning Quarterbacks. I open my arms to them and encourage their perspectives. Tell me how you really feel. Tell me what you really think. Because frankly, I would rather see a toxin and know that it’s coming than be slowly poisoned by the unheard, unseen, and unknown. I do my best to shift that negative energy into something more palpable: something that, perhaps, can add a splash of flavor to my cup of life. But if I fail — which, with many unavoidable life hazards, we often do: I raise my glass with one hand and gesture a wave goodbye with the other… perhaps with an extra digit, just to emphasize the point. With a wink and a nod, I walk away — wearing too-high heels for good measure — because what good is a poison if you can’t piss it off a bit?

Where positivity remains, love, peace, and acceptance are certain to follow. While hatred and negativity whisper in corners, encouragement and optimism make their presence known. So press forth. Walk on. Rise up. Stand tall. Toxic energy can only move outward: it makes no upward elevation.

Be light.
Be airy.
Be yourself.
Be the antidote.
And if you’re going to be the reason they talk — well, make it a damn good one.

The Business of Being a Bitch

It Could Have Been You (In Response to Nurse Alex Wubbels)

Bedside Nursing: Why I Stay 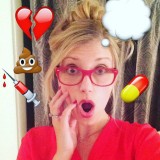 We use cookies to ensure that we give you the best experience on our website. By continuing to use our site, you consent to our use of cookies.Accept